These awards were from U.S. Government SBIR Contracts awarded to Quaterra to develop products conceived and invented by Dan F. Schramm. We should have also received an award in 1997, but we were overlooked. 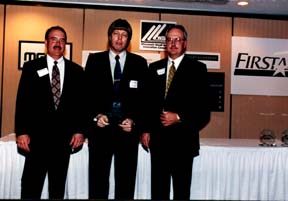 Dan F. Schramm, Quaterra CEO, is presented with an award from the Wisconsin
Small Business Innovation Consortium on September 23, 1998 by executives of Firstar Bank and the Wisconsin Department of Commerce.

Quaterra was written up twice by the Milwaukee Journal in the Business Section. The first time was in 1993 in regards to our new TTY-Vision product. The second article was the cover story, featured on the center spread of the Milwaukee Journal Sentinel Monday business section, which was the biggest business section of the week. The story was about some of the more interesting products funded by SBIR, and a major part of the article was about our TTY Universal Voice Mail product and the Reality Street game. The right hand side of the article listed all the companies (28) which had received SBIR contract awards in Wisconsin. Only a handful of companies were awarded two or more, like Quaterra.

Images of the artcles are available. Article 1 and Article 2.